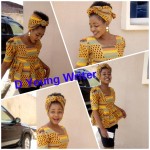 I was never a saint;
I started as a naive child,
with fantasies way above my head
Mommy used to say that’s the way she was born
an innocent sinner with an innocent face

We started as children with innocent plays,
with drama meant to entertain everybody
Indeed, we entertained our bodies;
touching, kissing, sucking – all parts of our plays
And though we sinned, I was innocent

Then I discovered the lies in mother’s words;
pregnancy don’t fly in a boy’s touch
But as soon as my body began to transform,
mother’s words became life which drugs helped to kill
Still, after swallowing drugs, my face remained innocent

Then came the day all changed,
the day the unkind flames melted my skin
People said I was lit up for stealing,
an occurrence I no longer remember
The last words I heard were, “such an innocent face!”

A writer filled with wild imaginations; a mind ready to travel across borders to touch lives

A writer filled with wild imaginations; a mind ready to travel across borders to touch lives

Wow, this is a wonderful piece

Cheers to the pain that made us stronger... #poemp

Congratulations to @ChelseaFC for winning the #UCLFinal . A deserving champion!

RE: To My Sleeping Beauty, Elis

To My Sleeping Beauty, Elis